Did you know that New Maryland was the location of the last fatal duel in New Brunswick just over 200 years ago?  The subsequent trial was politically & historically significant. On September 22, 2022, the Village of New Maryland  hosted a re-enactment of the Wetmore-Street Duel and Trial. A second presentation, held in October, was videoed as part of this project. A copy of the video can be viewed at the following link –https://www.youtube.com/watch?v=yWCjHcdWvy4.

Many thanks to Frantically Atlantic and our event sponsors. 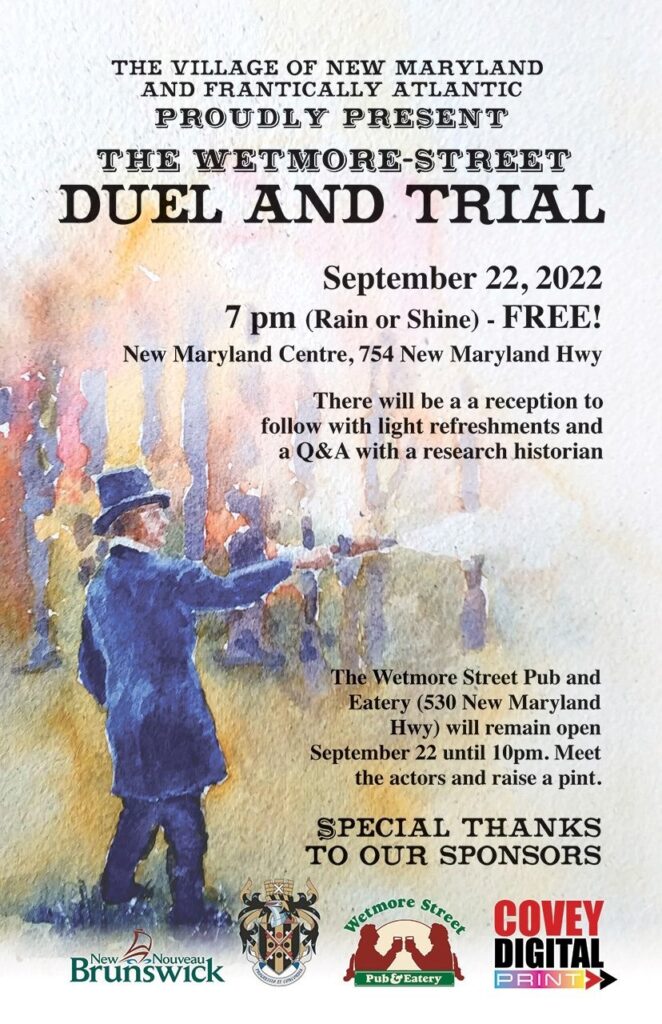 Written by Connie Shanks
As Published by the Atlantic Advocate
January, 1991 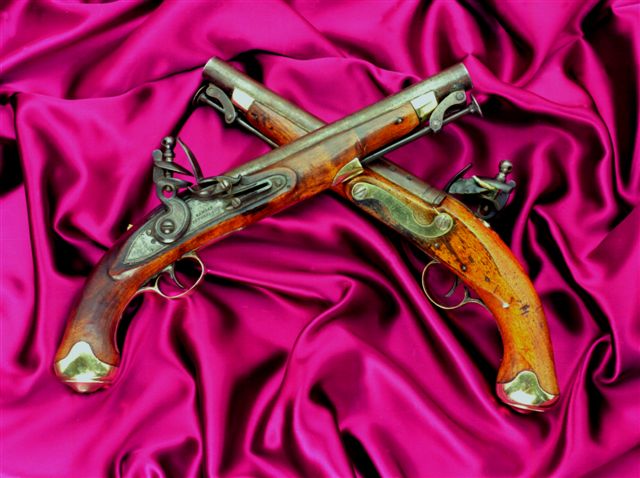 The Quarrel began innocently enough, with a simple case of mistaken identity. George Frederick Street, a respected attorney from one of New Brunswick’s most prominent families, had directed the sheriff to arrest Jacob Smith Sr., when the writ had actually been issued for Jacob Smith Jr.

The senior Smith, who was not on good terms with his son in the first place, was understandably annoyed by the mistake and charged the sheriff with false arrest and imprisonment, engaging the services of George Ludlow Wetmore, another prominent attorney.

Since the wrong man had unquestionably been arrested, the case was indefensible and Street, acting for the sheriff, chose to sign a judgment by default and have damages assessed by a sheriff’s jury. The assessment proceedings brought procedural wrangles and raised questions of propriety, and by the time the court adjourned on September 29, 1821, both attorneys were in a foul temper.

Outside the courtroom, onlookers heard a heated discussion of ethics and mutually unflattering remarks about the professional integrity of each man. Some later reported that Street had actually struck Wetmore, but the attorney maintained that he had merely raised his hand.

Wetmore’s father, Thomas, who held the post of attorney-general for the province, came between the battling barristers and it seemed that the incident was at an end. For George Wetmore, however, it was far from settled.

As he sat before his hearth that evening, the young lawyer’s anger blazed as brightly as the fire in front of him. He was oblivious to the sounds of his wife, pregnant with her fourth child, setting the children for the night. Street’s insults and the raised hand consumed him, until his thoughts took a dangerous turn. At 11 o’clock the next morning, Street answered a summons to his door to find John Winslow, acting as second for Wetmore, with a formal challenge to a duel. Surprised and shaken, Street nonetheless agreed to meet Wetmore provided that the contest be fought near Fredericton and as soon as possible.

As a good second should, Winslow tried to dissuade Wetmore from going ahead with the duel. On Monday, Winslow again went to Street with the proposal that if Street would make a public apology, Wetmore would withdraw the challenge. Street declined, and the parties agreed to meet at Maryland Hill, four miles from Fredericton, the following morning.

Although dueling was a well established practice in Europe by the 1800s and was not unknown in New Brunswick, it was illegal by 1821. Accordingly, the impending meeting was only known to the principals and their seconds; the wives and children involved were blissfully unaware that two lives were hanging in the balance.

Heavy mists hung under leaden sky as dawn broke that morning of October 2. Street and his second, Richard Davies, crested Maryland Hill at 6 a.m. and waited about half an hour for Wetmore and Winslow. The four men tethered their horses and walked to a clearing behind John Segee’s farm, which was hidden from the house by woods.

The seconds measured off fifteen paces and the principals solemnly took their places. The provision of weapons had been left up to Wetmore since Street owned no firearms, and one was slightly inferior to the other. The seconds drew lots, and Street got the better weapon.

The seconds loaded the pistols, being careful not to put in too much powder and kill their own man with a weapon that exploded on firing. They handed the pistols, fully cocked, to the principals and moved to the sidelines. Davies barked out the rules: pistols at your sides until ordered to fire; when ordered, raise one arm and fire as quickly as possible without aiming or stopping. (There wasn’t much point in careful aiming since pistols didn’t shoot straight before changes to the bore were made in 1830).

“Fire!” shouted Davies. Both men fired, and both stood unhurt. Immensely relieved, the seconds declared that honor had been satisfied and the duel should stop. Wetmore insisted on one more shot. Dueling etiquette demanded an exchange of weapons for a second shot; perhaps Wetmore felt that he could succeed with the superior pistol. “Fire!” Two more shots split the air, and this time Wetmore slumped to the ground, blood spurting from his arm and head. Street’s ball had entered the extended arm above the wrist and exited below the elbow before veering into Wetmore’s skull. When the others reached him, Wetmore was still alive, but barely. Dreadfully agitated, Street knelt beside the fallen Wetmore and cradled his bloodied opponent in his arms while Winslow ran to the farmhouse to get help. He gave the barest details and mentioned no names. John Segee sent one of his sons for a doctor while he and another son helped carry Wetmore to the house. As soon as Street and the seconds heard horses returning, they mounted and rode hard for St. Andrews. Mounted on fresh horses, they then crossed the border at Robbinstown, Maine.

Wetmore was pronounced dead at 10:07am, and the coroner quickly raised a Hue and Cry for the fugitives, undoubtedly pressed by friends of the Wetmores who were demanding justice. The reward of ten pounds each for Street, Winslow and Davies was never claimed, however. Street and Davies decided to face the music and surrendered in December; they were brought to trial on February 21, 1822. Winslow remained an exile considerably longer. The trial, presided over by Chief Justice John Sanders, was something of a farce. There seemed to be an unspoken agreement among the parties involved that Wetmore was as Street much to blame for his own demise as Street, and there was nothing to be gained from a hanging. John Segee and his sons, Abraham and Issac, testified that they couldn’t positively identify the prisoners and had not recognized the men with Wetmore that fateful morning. In this charge to the jury, Judge Saunders instructed them that “Should there be any doubt in cases of this kind, you acquit the prisoners, but in this case it is not in any shape legally brought home…One evidence, mentioning the dress of Mr. Street, said he had on a blue or black. It is proved by two witnesses (brother of the party) that he never wore a blue or black coat.” The jury followed the judge’s lead and voted for acquittal.

Restored to his law practice and the bosom of his family, Street began to pick up the threads of his life. Although his runs at representing York County in the elections of 1827 and 1830 were unsuccessful, he went on to become a judge of the Supreme Court. By the time he died at sixty-eight, his wife and three children had all predeceased him.

Street later wrote that “My honour and respectability are dearer to me than life, and when I am placed in a situation that obliges me to sacrifice both the former and risk the latter, I cannot for a moment hesitate which course to take…There are circumstances that may justify a man, even in the opinion of the world, in refusing a challenge, but this was not a case of that description; and had I refused to go out with him, I feel confident that I should have been condemned by every member of society and disgraced.”

Whatever Street’s feelings, Wetmore’s widow lived out the rest of her ninety-four years without once mentioning the duel. Her four children maintained the prominent profile of the family, with one son becoming a judge of the Supreme Court and later premier of New Brunswick.

Although two such illustrious families travelling in the same circles were often to meet, the Streets and the Wetmores never spoke again.