On behalf of Village Council and the citizens of New Maryland I welcome you to our official website.

I am humbled by the mandate I have been given for the next four years. I want to thank our residents for the trust you have placed in me. Your new Council combines members with years of experience with the fresh energy and ideas of a new member. I look forward to working with my colleagues on your behalf. We have been elected to work with and for our residents.

The Village of New Maryland has a population of approximately 4,500 and is located on the southern border of Fredericton, New Brunswick’s Capital City. We have been incorporated since 1991. In 1993 a new school was built in our community. Today the school hosts children from K to grade 5 and we are very fortunate to have such dedicated teachers. Our fire department just celebrated their 10th year anniversary. Under the leadership of our Fire Chief and many volunteers they provide an excellent service to our Village.

There has been an unfounded rumour circulating in the region regarding recycling at Fredericton Region Solid Waste. The rumour has suggested that recycling items packaged in blue bags are not actually recycled and simply diverted to the landfill.  These rumours are not true and the blue bag items placed at the curb on recycling days are treated in the same manner as items placed in a recycling bin.  You may have already encountered this rumour, or may hear of it in the upcoming weeks and months, but I would greatly appreciate it if everyone sets the record straight regarding blue bag items when the opportunity exists.  Our residents region-wide need to know that their work in sorting recyclables and placing them curbside for collection does make a difference, and their efforts are rewarded by these materials being recycled.

During our Annual Christmas Banquet, held December 6th, the following people were recognized for their years of service:

Merry Christmas and Happy New Year from the Mayor, Council and staff 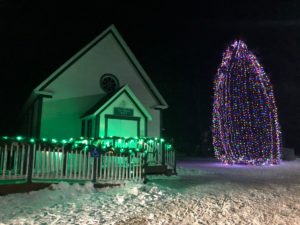 The Transportation sub-committee, of the Seniors Advisory Committee (SAC), met June 26, 2019 to discuss the results of the Transportation Survey that was issued to residents in April and closed in May of this year. These results were shared with the SAC at their September 23rd meeting as the committee did not meet during July and August.

Of the 519 survey responses received, 96.34% of respondents indicated that they travel to and from Fredericton using their own vehicle. Respondents also indicated that convenience of schedule (90.89%), cost of service (71.96%) and pick-up or drop-off locations (64.08%) were the most important factors that would influence their decision to use public transportation. 15.46% of respondents stated they would consider being a driver if there was a ride-share program. The sub-committee concluded from the  survey results that where a very high percentage of residents use their own vehicles for travel, along with other important factors, it is questionable whether a public transit system would be advisable at this time.

The sub-committee recommended some actions that could be taken to assist with transportation needs and those included: 1) discounted taxi rates – negotiate better rates for residents i.e.: seniors’ rates, students’ rates, accessibility rates and special rates for certain zones; 2) complete a walking/bike path connecting the Village to Fredericton, which is already being investigated by the Mayor with UNB, NB Trails and the City of Fredericton; and 3) repeat the survey efforts on regular intervals (every 2 years) to determine changing factors that might impact transportation decisions. Future survey results can be compared to the results from the first survey, which acts as a benchmark.

At this time the survey results indicate that the potential use of public transportation in the Village would not justify the significant costs involved. However, the SAC continues to consider other transportation options that may be feasible for the Village, such as ride-share and dial-a-ride programs, and plans to perform another survey in 2021 to see how transportation needs in the Village have changed.

Congratulations to the Parish of New Maryland Zoomers who recently celebrated their 10th Anniversary with an anniversary cake cutting on October 17, 2019 at the Zoomers Halloween soup luncheon.

In the photo from left to right are: Judy Ingram, Mayor Judy Wilson-Shee, Lillian Beaver and Zoomers President Gary Campbell. 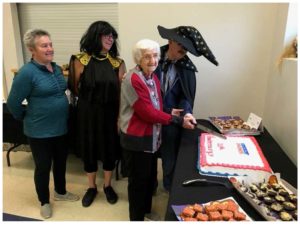 The “Frank Dunn” Annual New Maryland Open Golf Tournament will be held this year on Saturday Sept. 7 at Gage Golf and Curling Club in Oromocto. Registration deadline is August 30th and completed forms can be dropped off at the Village office. For more information, contact Mayor Wilson-Shee at 459-3535 or Judy.Wilson-Shee@vonm.ca.

PDF version of the registration form can be found here.

At the May 15, 2019 Council meeting, Mayor Wilson-Shee presented certificates of appreciation to the members of Team NB who competed in the 2019 Canada Winter Games in Red Deer, Alberta in February 2019, and who are New Maryland residents. Team members who received certificates were Alex Peasley (Curling), Mohamad Hariri (Boxing), and John Bourgeois (Boxing Head Coach). Other team members, Julia Arnason and Emily Johnston, who competed in Artistic Swimming, were not able to attend the meeting. Mayor Wilson-Shee noted that she will make arrangements to present Julia and Emily with their certificates at a later time. On behalf of Council and staff, Mayor Wilson-Shee extended congratulations to the members of Team NB who participated in the Canada Games, and represented the community and province so well. She wished them much success in their future competitions. 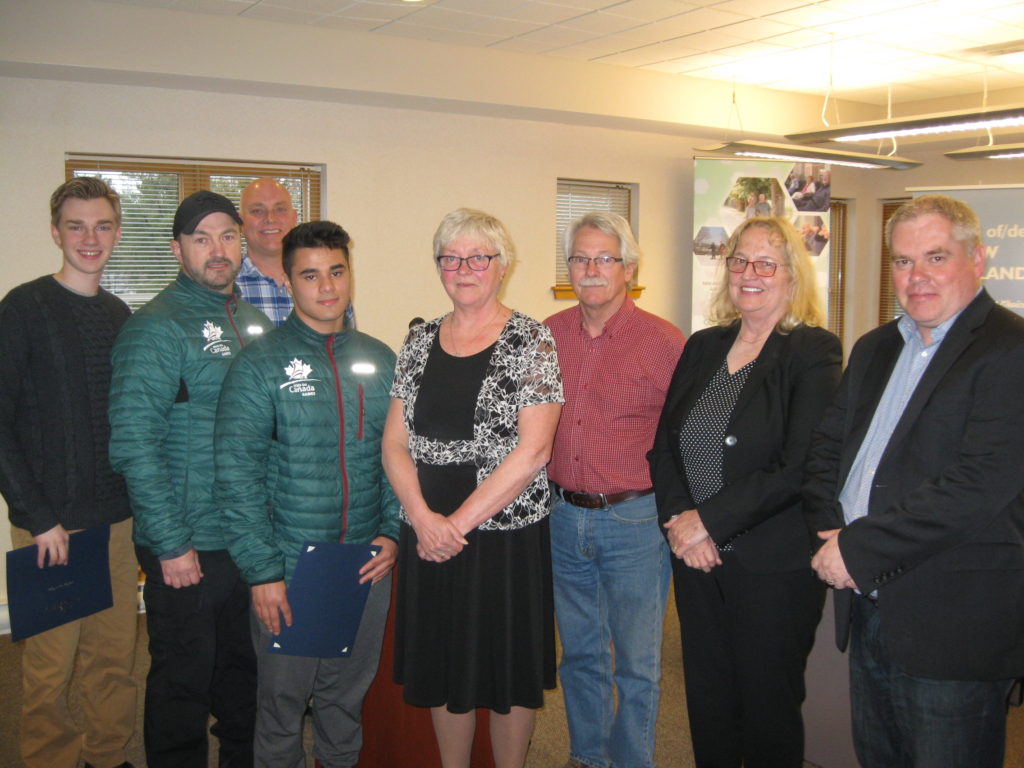 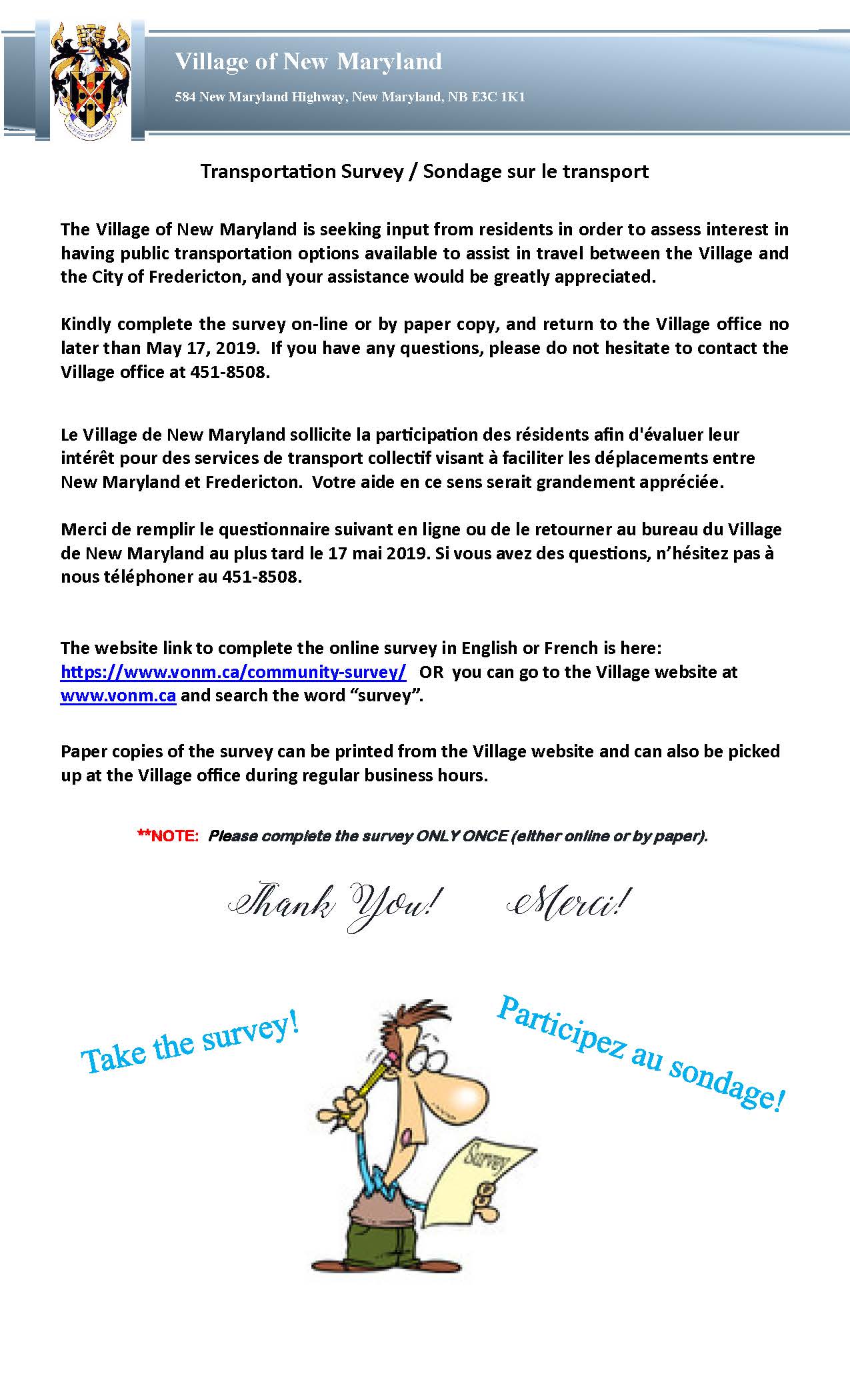 Monday, February 25, 2019, the Guides of New Maryland held their fun fair which celebrated World Thinking Day. It was a day to reflect on their global sisterhood in Guiding and to think about issues that are important to girls and women around the world.

2019 World Thinking Day theme was Leadership. It is dedicated to the group of girls who took the lead in 1909 and demanded Lord Baden-Powell create ‘something for the girls’.  It was an honour to be invited to the Awards Ceremony and presented the following two awards:

The Duke of Edinburgh’s Award

The Duke of Edinburgh’s International Award is an internationally recognized program for young people, building their skills to equip them for life and work. By creating opportunities for young people to develop skills, get physically active, give service and experience adventure, the Award can play a critical role in their development.

It allows our youth to determine what they are passionate about, regardless of their background, culture or access to resources.

The Award encourages young people to spend time volunteering in their community, which both benefits others and contributes to their own growth and well-being.

It was an honour to present Alex Rayworth with the Duke of Edinburgh – Bronze Level Award. Congratulations! 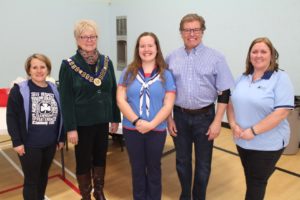 The Canada Cord is the highest award that a Pathfinder can earn. The requirements include completing the three year Pathfinder Program as well as extra initiatives in the areas of Community Service, Volunteering, and specific hours spent in developing Leadership or Camping Skills.

Having completed the requirements for this Canada Cord Award, we know that Nicole’s Guiding experiences will take her into a lifetime of good deeds and prepare her for a life of service to others, bringing light into the lives of those less fortunate than herself, always being prepared for anything and challenging herself to dream big and make a positive impact.

This award in our area is presented in the fall but due to conflicting schedules it was rescheduled to February 25.

It was a pleasure to present the Canada Cord Award to Nicole Kirby. Congratulations!

Below is a breakdown of scheduled events and meetings that I, Mayor Judy Wilson-Shee, have attended and/or chaired in 2018:

I am pleased to report that I was able to attend all scheduled RSC 11, CIC and Formal Council meetings.

2018 was a busy and productive year.  It is an honour to represent the residents of New Maryland as your Mayor, and I look forward to serving you in 2019.

During our Annual Christmas Banquet, held December 7th, the following people were recognized for their years of service:

Congratulations to all recipients!

Merry Christmas and Happy New Year from the Mayor, Council and staff 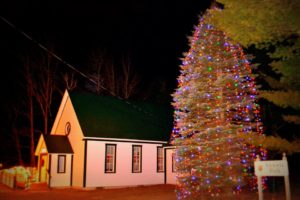 The stone sculpture that is permanently situated at Victoria Hall Park was created by artist Songul Telek, from Tocat Turkey, and the name of her work is “ENTROPY”. The inevitable expansion and distortion of the universe is called entropy. It is often defined as randomness and disorder in a system. Songul has told us that in her sculpture she wanted to “figure out a harmony throughout contradictions. Thus, a meaning which holds the very essence of being, the existence of human, earth, universe and life”.

The sculpture weighs approximately 6 tonnes and is a solid piece of granite, which comes from the Hampstead Quarry (Spoon Island North Quarry). 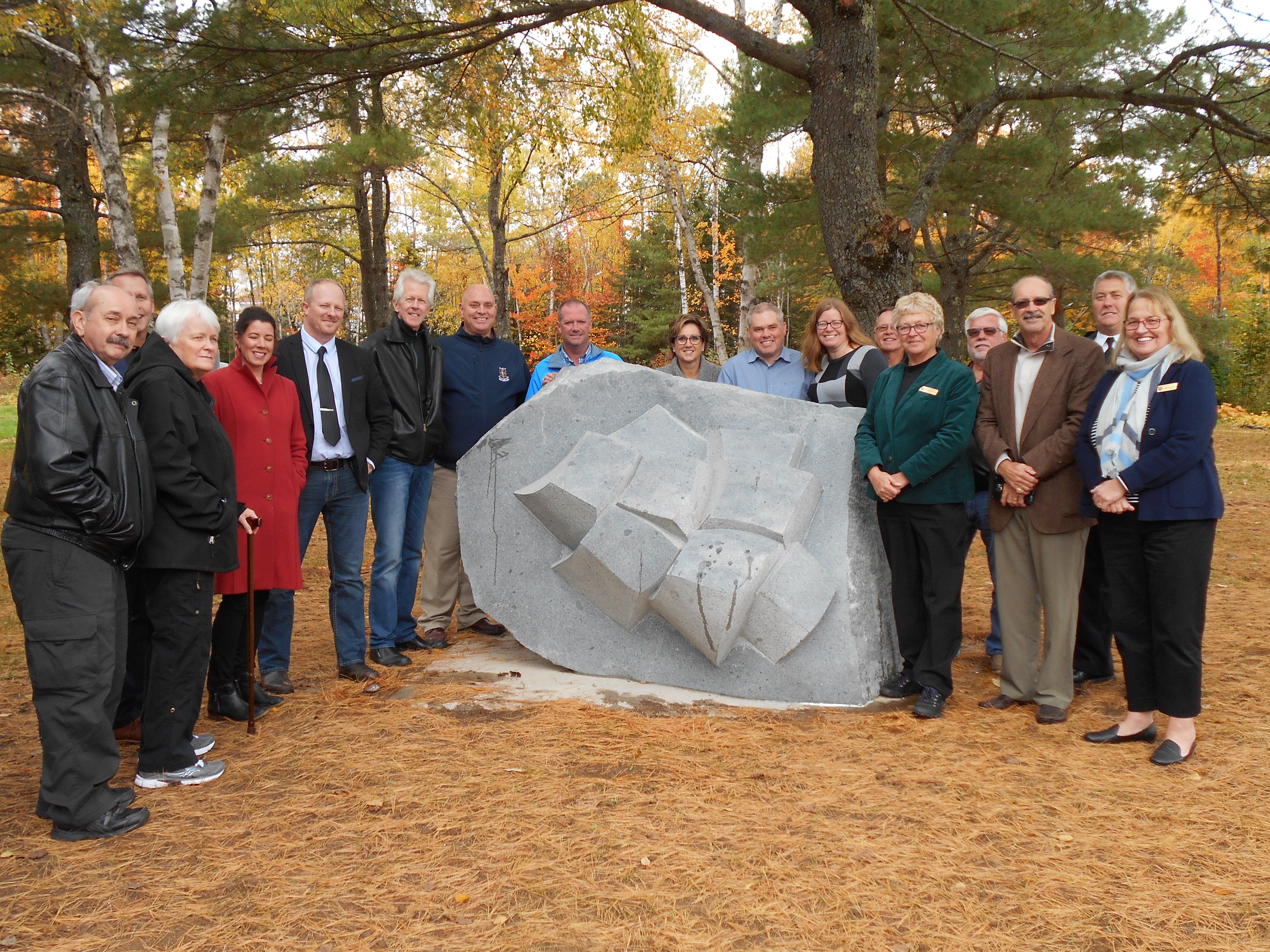 Songul Telek is the artist at this year’s Sculpture Saint John Symposium who will be creating a sculpture for New Maryland.  Songul Telek is from Tocat, Turkey and graduated from the Sculpture Department at Mimar Sinan University.  She has participated in over 20 symposiums and multiple exhibits throughout Turkey, USA, Egypt, India, Romania, Syria and the Czech Republic. During the Schoodic International Sculpture Symposium in 2011, Songul created a sculpture for Bar Harbour Maine and we are fortunate that she is participating in this year’s New Brunswick International Sculpture Symposium in Saint John and creating a one-of-a-kind sculpture for New Maryland.

The piece of art that Songul is creating for our community is valued at $100,000 however the Village is only required to cover $16,000 of the cost. Additional expenses include transportation of the sculpture from the symposium site to New Maryland, construction of a concrete base, installation and landscaping.

We are fortunate that Opus International has agreed to sponsor the sculpture in the amount of $7500.  The New Maryland Community Support Group has agreed to use the proceeds from this year’s golf tournament toward offsetting costs associated with acquiring the sculpture.  Also, the revenue from the sale of the 2018 calendars will be used towards this project. 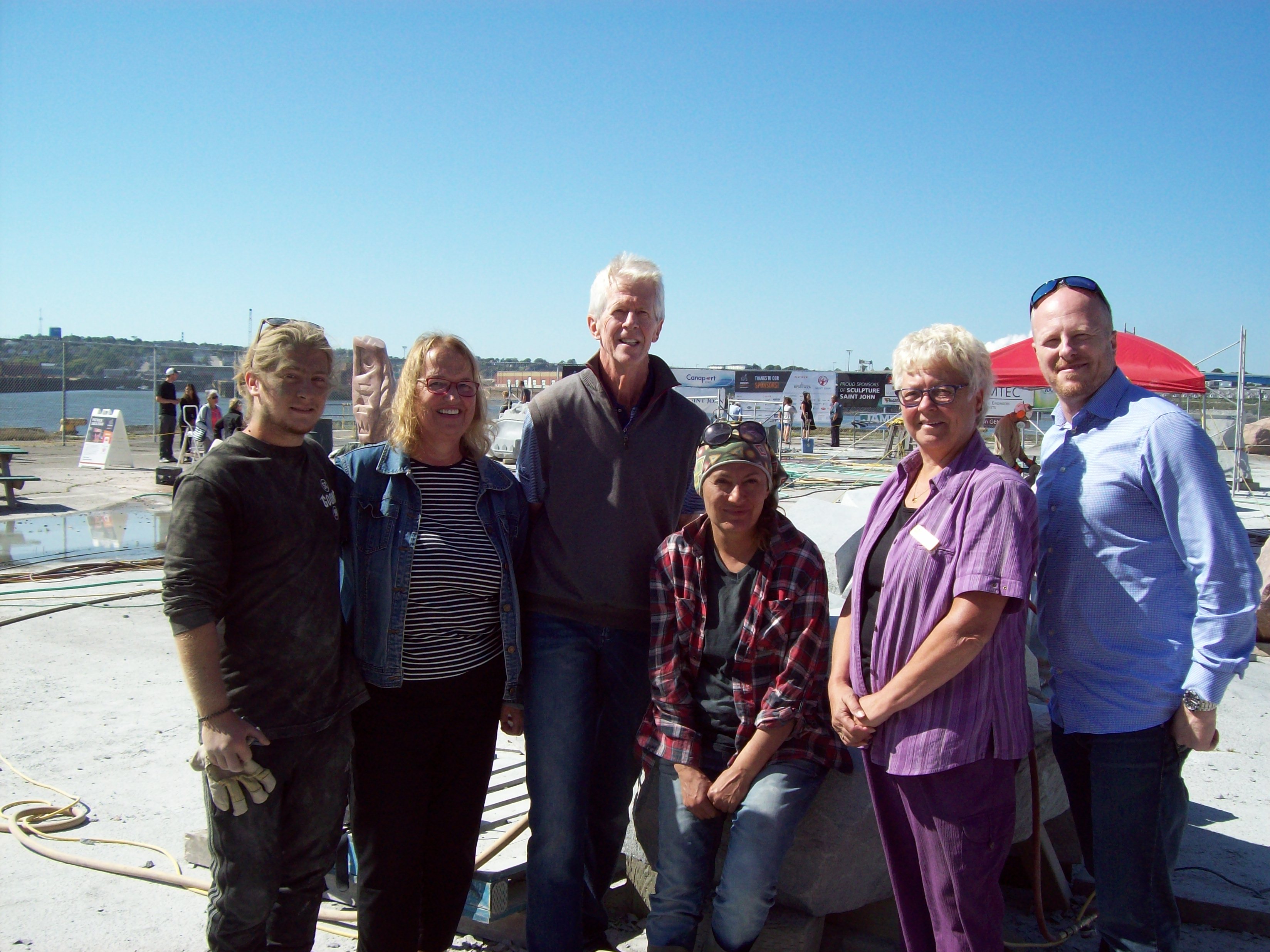 In support of the Acadian community and in recognition of French Acadians living in the Village of New Maryland, we raise the Acadian flag today to celebrate the culture and heritage of the Acadian people.

In honour and respect of those who lost their lives in the August 10, 2018 shooting tragedy in Fredericton, we lowered the Acadian flag to half mast until sunset on Saturday, August 18, 2018. 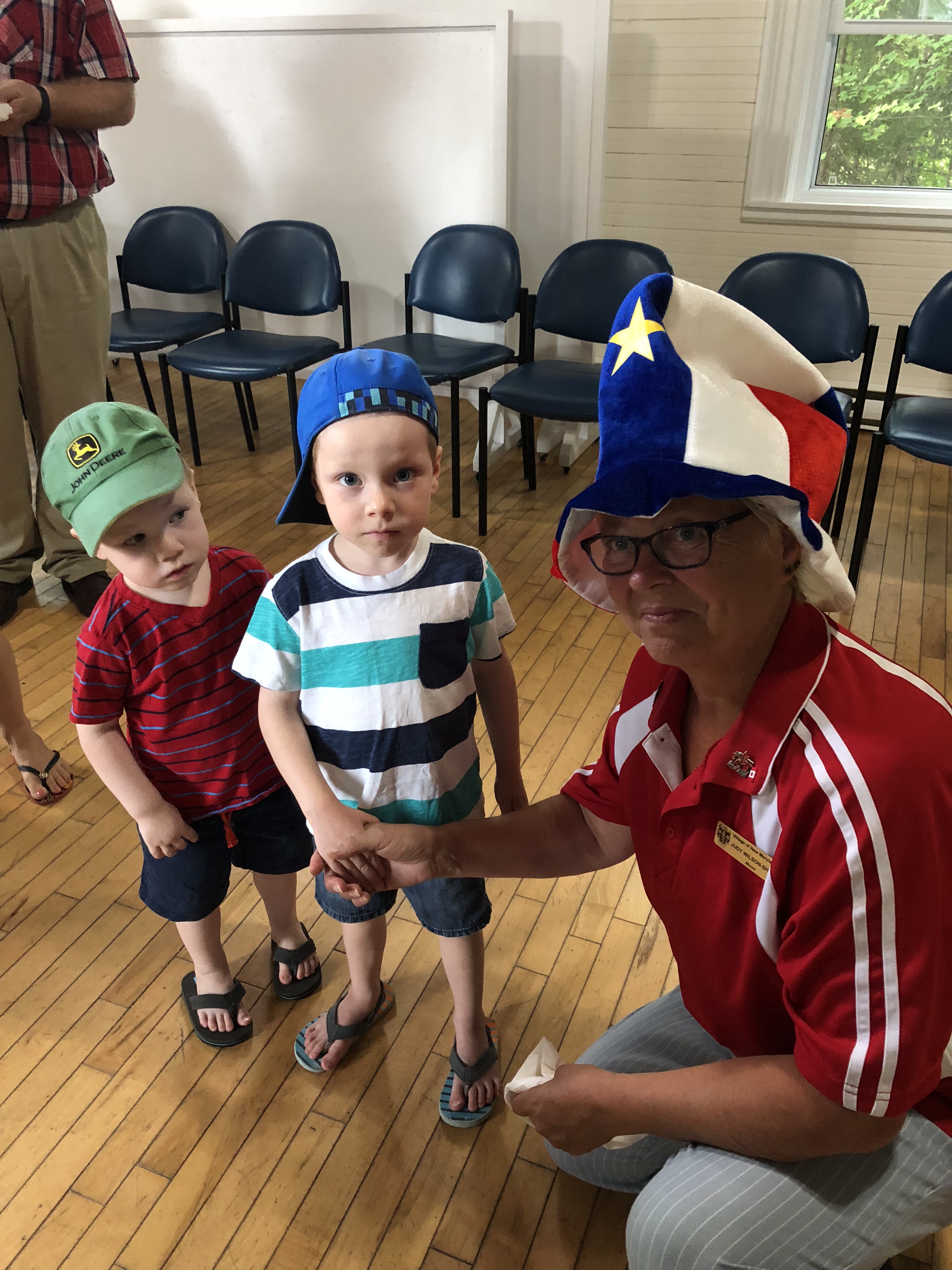 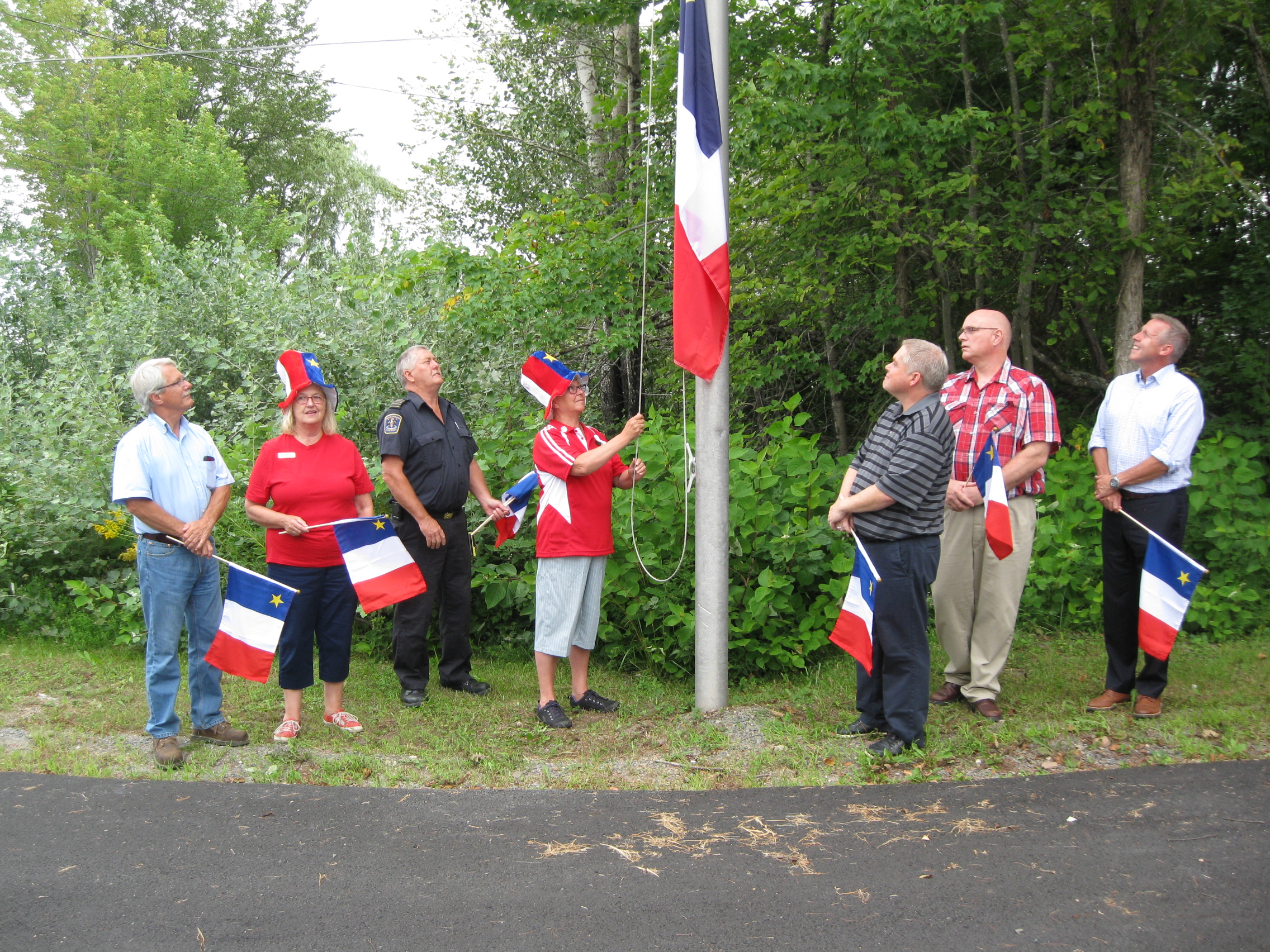 As a resident of Sunrise Estates subdivision, Stephen is a UNB graduate with a Bachelor of Science Degree in Forestry, majoring in Resource Management.

Stephen dedicated his entire career, until his recent retirement, as an employee of the NB Department of Natural Resources as a resource and facilities management planner and as a long-time member of the Association of Registered Professional Foresters of New Brunswick.

Stephen’s tenure on PAC spanned between September 1997 and June 2018.  The committee benefitted greatly from Stephen’s wealth of knowledge and experience during his more than 20 years of membership.  The importance Stephen places on engagement in the community is also evidenced through 15 years as a former leader in the local Scouting movement.

On behalf of Council, staff and his former colleagues on PAC, I would like to thank Stephen for his years of dedicated service. I also wish to acknowledge his contributions to the betterment of the Village through his valued input on land use, development and planning matters during his tenure on the committee.  The Village is very fortunate to have residents like Stephen who demonstrate such a high level of engagement in their community. Stephen was presented with a small token of sincere appreciation. 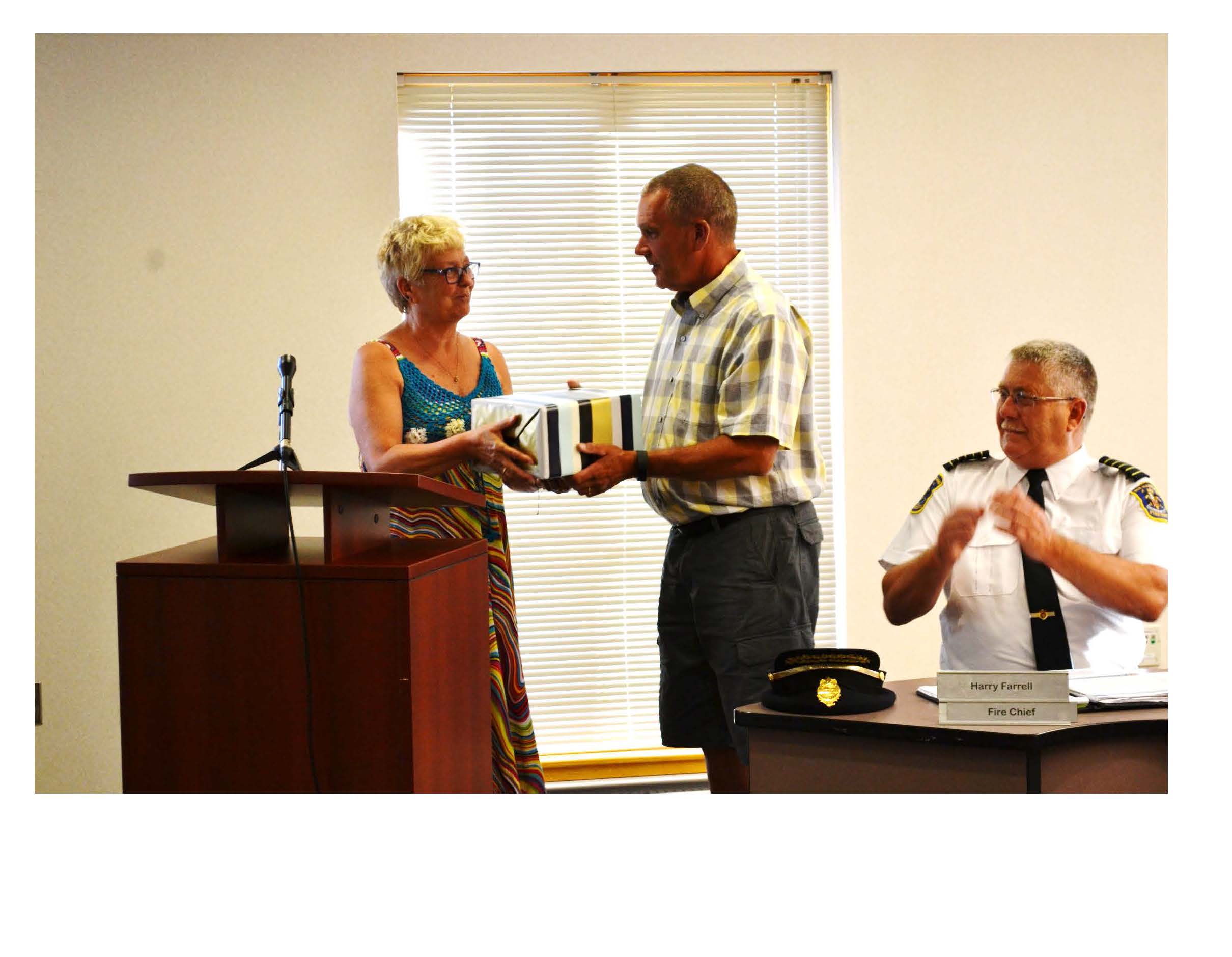