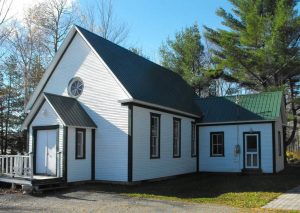 The New Maryland Women’s Institute was formed on June 7th, 1915, and shortly thereafter it was determined that a new hall was needed to accommodate their meetings and special events. With land donated to the WI by James Horncastle, construction of Victoria Hall (named after Queen Victoria) began on May 24th, 1917. The hall was ready for the first annual meeting of the New Maryland Women’s Institute in June of 1918.

During the two world wars, members wrote letters and sent care packages to soldiers oversees. Money was also raised and sent to the Belgian Relief Fund (1917), victims of the Halifax explosion (1917), the British Children’s Relief Fund (1942) and the Russian Relief Fund (1943). The WI raised money by selling baked goods, Christmas cards, tickets on quilts and knitted items and subscriptions to the magazine “Home and Country”. They also organised card parties, bingo parties, held suppers and rented out Victoria Hall for functions such as dances and weddings.

Because of rising costs, in 1993, the Village of New Maryland entered into a 10 year lease with the Institute for use of the building and adjacent property and essentially took over the care and maintenance of the hall and park resulting in many upgrades and improvements. Originally the hall stood only a few steps from Hwy 101, however, in 1993 it was decided by Village Council that the building should be moved further back on the lot to a safer location. A new foundation was poured and the hall now sits a comfortable distance from the highway. In 1996, further upgrades were completed with the drilling of a new well and the installation of a septic holding tank which allowed for the addition of washrooms to be built that significantly improved the functionality of the hall. Prior to this time, an outhouse at the rear of the property was the only source of relief for those using the hall. Also that same year, the electrical system was upgraded and electric baseboard heaters were installed, therefore allowing the hall to be used year round. The area surrounding Victoria Hall was developed into a park and garden and in 1995, a Veteran’s Memorial was installed and has since become the focal point for annual Remembrance Day services.

In 2003, a decision was made by the members of the NM Women’s Institute to sell the hall and surrounding park land to the Village of New Maryland. Victoria Hall has since become a recognized landmark in the Village and is host to many community events throughout the year. The hall is also available to the public to rent for special occasions at a minimal rental fee.

Many more renovations have taken place over the years, the drop ceiling was removed to uncover a beautiful barrel-vaulted wood ceiling. The previously boarded up circular window was refurbished and several of the broken stained glass panels were replaced. More recently, through yearly capital project budgeting and with the help of numerous grants, the following renovations and upgrades have been completed while maintaining the historical significance of the hall: